UNITED NATIONS — The White House coronavirus response coordinator says Americans must not gather indoors with outsiders or take off their masks at any time when they are outdoors — even when they are eating and drinking.

Dr. Deborah Birx says people also have to observe social distancing and wash their hands to contain the coronavirus pandemic. She says some states are taking these measures, but in others it’s “not happening at the level that they need to happen.”

Birx says that even once vaccines are approved, it will take weeks to months before “the most vulnerable individuals in America” can be immunized.

She made the comments after meeting with U.N. Secretary-General Antonio Guterres and General Assembly President Volkan Bozkir at U.N. headquarters in New York on Thursday.

UNITED NATIONS — The White House coronavirus response coordinator says Americans must not gather indoors with outsiders or take off their masks at any time when they are outdoors — even when they are eating and drinking.

Dr. Deborah Birx says people also have to observe social distancing and wash their hands to contain the coronavirus pandemic. She says some states are taking these measures, but in others it’s “not happening at the level that they need to happen.”

Birx says that even once vaccines are approved, it will take weeks to months before “the most vulnerable individuals in America” can be immunized.

She made the comments after meeting with U.N. Secretary-General Antonio Guterres and General Assembly President Volkan Bozkir at U.N. headquarters in New York on Thursday. But experts warn that’s a best-case scenario — and could easily be derailed by any number of blunders along the way.

It requires not only manufacturing of more than 600 million doses of the two-shot vaccine, but also transporting it to all corners of the country, making it accessible to Americans of all stripes, and persuading them it’s safe.

“I think that is very optimistic of Moncef,” said Norman Baylor, who formerly directed the Office of Vaccines Research and Review at the Food and Drug Administration. “It’s possible if everything worked out perfectly.”

Slaoui is nonetheless laying out an ambitious timeline for vaccine approval, manufacturing and distribution.

Back in August, he projected having just 300 million doses ready by the middle of next year, in a piece published by the New England Journal of Medicine.

But since then, preliminary analysis has found vaccine candidates developed by Pfizer and Moderna to 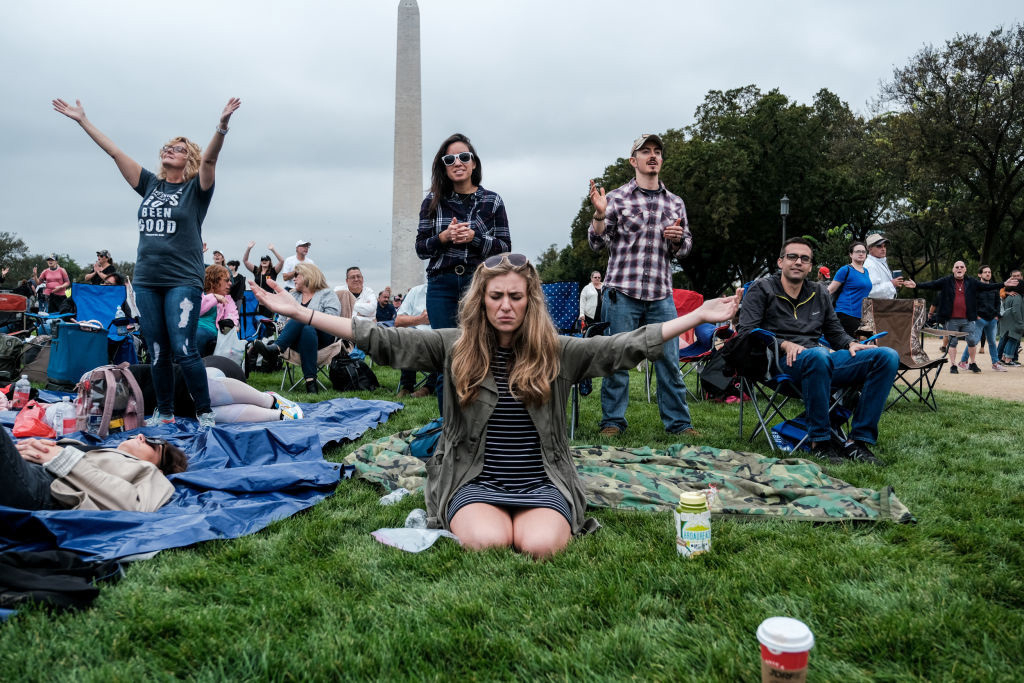 Most Americans back religious freedom as they agree that religion is a “fundamental part” of people, a recent survey by the Becket Fund for Religious Liberty found.

Sixty percent of Americans said that “religion, for some people, is a fundamental part of ‘who I am’ and should be protected accordingly.”

A majority of the 1,000 respondents across the United States also agreed that religious freedom and exercise are inherently public and extend to school, work, social media and other places. Generation Z and black respondents supported this belief most strongly, the survey found.

“Data from the Index and additional The agency has already laid out four groups that should be considered for priority: health-care personnel, workers in essential and critical industries, older adults, and people with certain underlying medical conditions — including “severe obesity.” But it’s unclear to what extent the CDC’s Advisory Committee on Immunization Practices will prioritize this group.

Research suggests that obesity increases the chances for hospitalization and death.

There’s been much discussion about how underlying medical conditions such as hypertension and Type 2 diabetes are associated with higher risk of dying from the coronavirus. But these conditions are most frequently found in people who are obese — making it difficult to discern whether the medical conditions or the obesity were the biggest factors at play.

The evidence, Popkin argues, points to extra weight as a bigger risk factor than any individual comorbidity. That’s because people who are overweight or obese have more body fat —

America should prepare for a “surge upon a surge” in coronavirus cases as millions of travelers return home after the Thanksgiving holiday, top US scientist Anthony Fauci warned Sunday.

The United States is the world’s worst-affected country, with 266,831 Covid-19 deaths, and President Donald Trump’s administration has issued conflicting messages on mask-wearing, travel and the danger posed by the virus.

“There almost certainly is going to be an uptick because of what has happened with the travel,” Fauci told CNN’s “State of the Union.”

Anthony Fauci, director of the US National Institute of Allergy and Infectious Diseases, has warned of a ‘surge upon a surge’ of the virus after Thanksgiving travel Photo: GETTY IMAGES NORTH AMERICA / TASOS KATOPODIS

Travel surrounding Thursday’s Thanksgiving holiday made this the busiest week in US airports since the pandemic began.

“We may see a surge upon a surge” in two or three weeks, Fauci

SATURDAY, Nov. 28, 2020 (HealthDay News) — Nearly 7 in 10 Americans have lost sleep because they drank alcohol too close to bedtime, including 1 in 5 who often have this problem, a new poll shows.

In the American Academy of Sleep Medicine (AASM) survey, men were more likely to say they’ve lost sleep due to drinking alcohol than women (75% vs. 60%), and adults ages 35-44 (78%) are most likely to have a drink too late at night.

“While you might think alcohol helps you sleep, there are negative effects to having a drink close to bedtime,” said AASM President Dr. Kannan Ramar, a sleep medicine physician at the Mayo Clinic.

“Alcohol use can fragment your sleep, leading to more frequent awakenings during the second half of the night,” Ramar explained in an AASM news release.

The number of coronavirus infections in the United States shot past 13 million on Friday, worsening the world’s largest outbreak. The milestone came as Americans embarked on a Black Friday that looked different from holidays past.

The U.S. has had one of the world’s highest per capita caseloads in the past week. And every day for more than two weeks, the country has set records for the number of people in the hospital, with the latest figure surging past 90,000 for the first time on Thursday.

At the same time, the nation saw a steep drop-off in new cases on Thursday, but it was a mirage, not progress, because many states did not report data on the Thanksgiving holiday. More than 103,000 cases and more than 1,100 deaths were recorded on Thursday — compared with 187,000 cases and 1,962 deaths that had been recorded the prior Thursday, Nov. 19.

The researchers said their findings show that in order to tackle the national overdose crisis, special attention must be paid to teens and young adults, and cannot focus only on opioids.

“Our study provides significant insight into what is driving opioid-related overdoses among adolescents and young adults, which can help improve treatment and outcomes in this population,” study co-author Dr. Scott Hadland said in a Boston Medical Center news release. Hadland is a pediatrician and addiction specialist at the hospital.

America enters the somber holiday weekend following a Thanksgiving Day that saw more than 100,000 new Covid-19 cases and 1,200 deaths — skyrocketing numbers given that 20 states did not report data.

© Go Nakamura/Getty Images
Dr. Joseph Varon hugs and comforts a patient in the Covid-19 ICU during Thanksgiving at the United Memorial Medical Center in Houston.


Traditionally the start of a time of shopping and giving, the final days of November have seen record highs in the worsening pandemic — surpassing previous surges and showing no signs of slowing down in the precarious winter months.

The US on Thursday marked the 24th day in a row with more than 100,000 new cases. Hospitalizations hit a new high — for the 17th consecutive day — with more than 90,400 Covid-19 patients nationwide, according to the COVID Tracking Project.

The country’s death toll since the pandemic’s start is